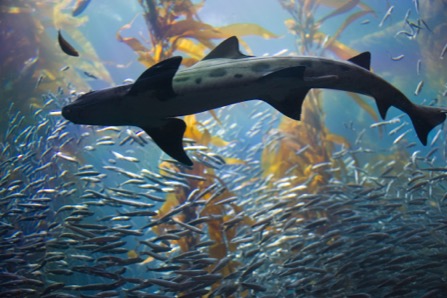 Near the Palos Verdes Peninsula, a group of divers quietly falls below the ocean’s surface and descends into a canopy of giant kelp. Snails and nudibranchs ornament the blades, as fish weave in and out of feathery gold fronds, and spiny lobsters congregate in patches of sea grass on the bottom.

Over 700 marine species rely on kelp forests for food and shelter, creating complex, interconnected communities. Kelp are able to drive such dazzling biodiversity with high rates of carbon cycling. They are robust primary producers, creating and storing large amounts of sugars through photosynthesis. This carbon-stored-as-sugar is then available to grazers like sea urchins, who continue to move it through the intricate relationships of the food web. The result is a dynamic habitat created by a living organism. 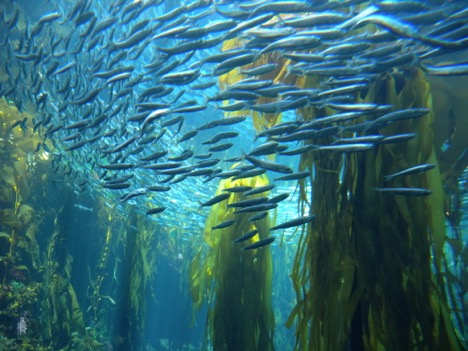 Off the coast of Southern California, kelp productivity generates thriving marine forests that offer a range of ecosystem services to local communities, from healthy fisheries to recreational opportunities like scuba diving. However, disruptions to the flow of carbon through the system have threatened to diminish the benefits received from kelp forests.

The key to this ecosystem’s health is maintaining a balance between kelp and sea urchins. In recent years along the coast of California, key predators like sheephead wrasse, sea stars, and spiny lobsters have diminished from a combination of overfishing, changing ocean temperatures, and disease. Less predation has resulted in explosions of urchins that have overgrazed the forests into underwater deserts known as ‘barrens’.Â The urchins covering the barrens are not useful to fishermen or to the ecosystem because they are malnourished and underdeveloped: there are too many of them and not enough sustenance. 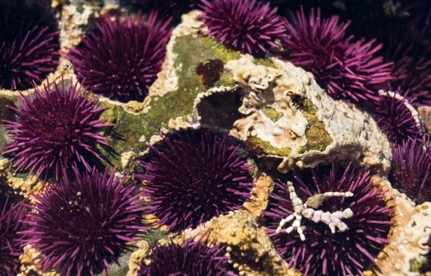 Â  Â  Â  Â  As this balance between macroalgae and urchins has shifted, primary production has slowed and 75% of kelp forests around the Palos Verdes Peninsula have faded into barrens. This loss of life has been felt in both the commercial fishing and tourism industries. Fortunately, local stakeholders have banded together to work toward solutions.

Led by the Santa Monica Bay Restoration Foundation, fishermen, marine biologists, and local conservationists have been working together toward the shared goal of scaling back the runaway urchin populations and rejuvenating the kelp habitats. Teams of divers have been physically clearing out urchins to give the kelp a window of opportunity for regrowth.

In a recent report on the project’s progress, the Bay Foundation wrote that “Early results from this work are already apparent, with the development of a variety of macroalgae occurring on the reefs in all sites as well as increases in fish species richness and biomass.â€ In other words, removing the excess urchins is giving the kelp a chance to prove its resiliency and get organic carbon flowing again, which benefits everybody.

The kelp restoration project at Palos Verdes Peninsula offers a model for other communities up and down the coast of California hoping to save their kelp forests. By giving local stakeholders an opportunity to play for the same team toward the same goal, their project has allowed our underwater rainforests to begin blooming again.