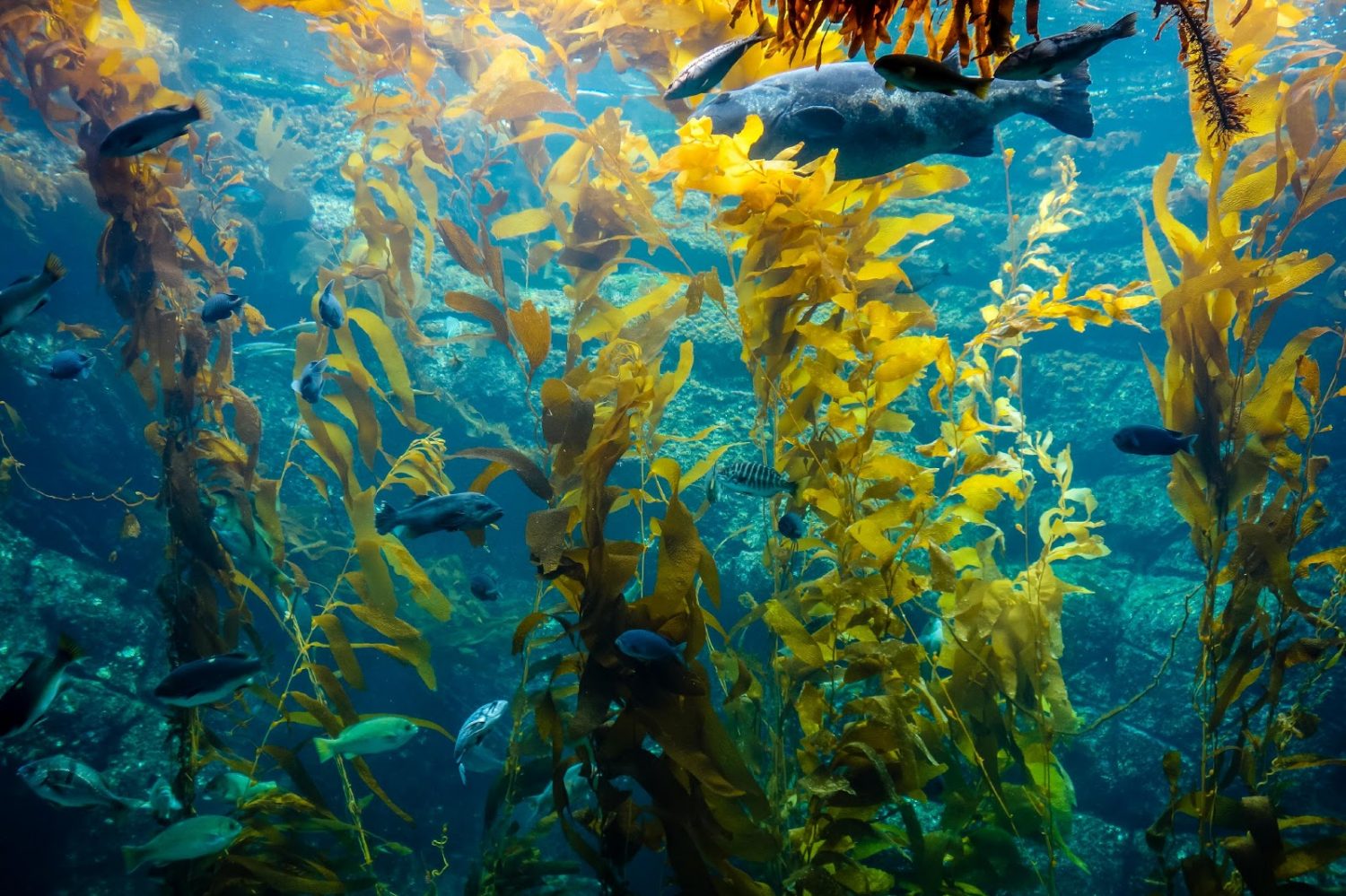 Giant kelp, Macrocystis pyrifera, and bull kelp, Nereocystis leutkeana, dominate Southern California and Baja California’s kelp forests, which are both a foundational species and an ecosystem engineer. These marine ecology terms mean that kelp not only defines that ecosystem, but it significantly alters its environment to the benefit of other fish, mammals, and invertebrates that live and eat there. As a direct result of the presence of kelp, ocean productivity, species richness, and biodiversity increase.

Southern California’s coastline provides favorable conditions for its growth: an ideal depth where kelp can anchor to bottom substrate while receiving light for photosynthesis, cool water flowing from northern oceans via the California Current, and rich upwellings where bottom water brings nutrients to the surface. These elements allow for its rapid growth (up to two feet a day for giant kelp!) and aid in its recovery after seasonal changes in water temperature, disturbances from predation, and uprooting from storms and wave action.

Even with these ideal conditions, kelp forests in Southern California have been through major changes in the last century, including a two-thirds reduction in biomass from 1957-1996 due to multiple stressors, particularly an increase in ocean temperatures. Kelp’s sensitivity to nutrient-poor warm water leaves it vulnerable to the rise in both seasonal and annual sea surface temperatures. The increasing frequency and strength in El Nino southern oscillation events, which bring unusually warm water and heavy storms, also cause high kelp mortality. Additionally, ever persistent sea urchin armies (kelp’s natural predator), have a ravenous appetite and are able to consume and decimate a kelp forest, leaving it little room to recover. The combined frequency of these disturbances, not the individual severity, prohibits kelp forests from recovering to historical abundances.

Without kelp forests for food and shelter, harbor seals, lobsters, garibaldi (California’s state marine fish), and many other species will die or be forced to relocate. This loss will also affect us economically. Kelp forests support various fisheries; attract scuba and free divers from around the world, which support California’s tourism industry; and they protect infrastructure on the coastline from wave action and erosion.

If Blue Planet releases a third documentary series fifteen years from now, how will kelp forests have changed? As water temperature and the number of biological disturbances increase, will they be resilient enough to acclimate? Will we find smaller communities of kelp that are better able to tolerate environmental changes? Even though Southern California’s giant kelp is currently faring better than others, a worldwide decrease in kelp forests sets the state for what the future may look like. We may be able to recreate the soothing narration of Sir David Attenborough’s voice for the future release of Blue Planet III, but the ocean’s changing conditions won’t likely be able to recreate the current beauty of Southern California’s kelp ecosystem in the decades to come.