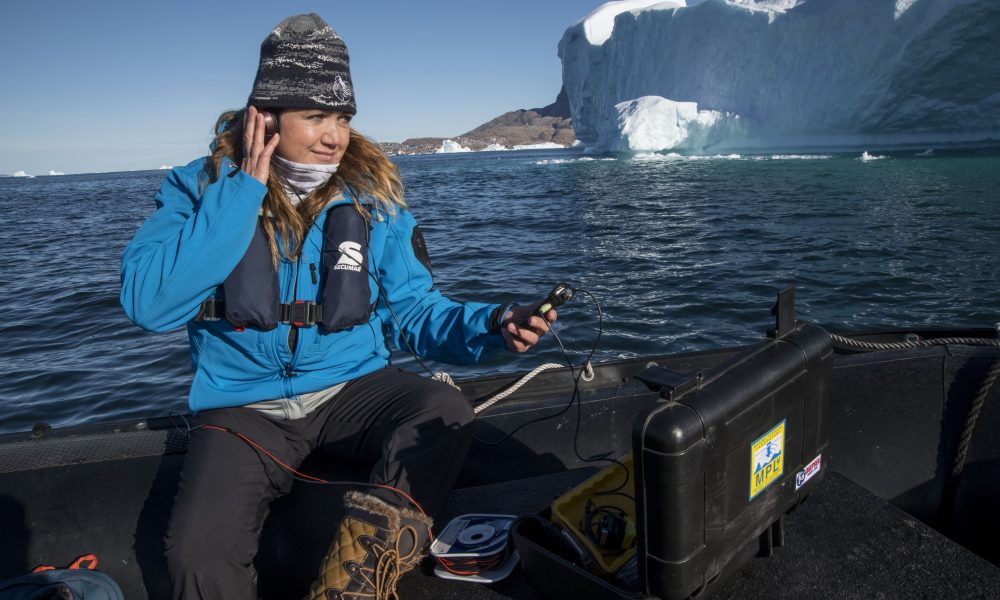 MAS MBC alumna Cynthia Matzke (2014) was recently featured in the SDVoyager for her work as part of a dynamic group of female Polar Explorers!

Today we’d like to introduce you to Cynthia Matzke.

So, before we jump into specific questions about the business, why don’t you give us some details about you and your story.
I grew up on an island outside of Seattle, and a love for dolphins as a teen morphed into a fascination with the regions most powerful predators: the killer whales. Soon after, I longed to swim with large whales and scuba dive to stare into the eyes of as many marine creatures as possible and glimpse their world.

By the age of 20, I became a scuba instructor to pay for college and started to travel to remote locations to dive and immerse myself in as many marine ecosystems as I could manage. My fascination for all things Ocean grew and graduated with degrees in journalism and marine biology. I heard my calling to study whales — specifically their calls, songs, clicks and whistles. My journey into the world of bioacoustics had begun.

Following the whale trail from Washington to California, I ended up on Maui studying humpback whales. Over the next two decades, I spent most of my time sailing on, diving in, or researching the ocean. The effects of human development and the accumulation of plastic trash in remote places began to weigh on me. I felt driven to stop this degradation I was witnessing and hoped that by refining my skills as a scientist, teacher and journalist, I could possibly slow this downward spiral and create positive change.

On Maui I helped create a program with a local sailing company tour operator called Trilogy Excursions, to engage locals in citizen science and helped develop a monthly reef cleanup program that combines science, action and advocacy to bring about positive change in our community. That program is successful a decade later, as I know other people were seeing and feeling the same, we all just needed to figure out the vehicle to bring about this shift in action and consciousness. This led me on my first expedition — to sail 3,000 miles in a monohull sailboat to document and quantify marine debris and plastic in the Western Pacific Gyre.

In 2013 I returned to school to earn a Master of Advanced Studies in Marine Biodiversity and Conservation from Scripps Institution of Oceanography. I made San Diego home, and now create STEAM curricula for UC San Diego and the Sally Ride Science Academy as well as work as a professor at the private university NewSchool of Architecture + Design. My love for science outreach and exploration have grown, and I have naturally turned to the next generation to inspire change and ignite their passion in the ocean.

Part scientist, part journalist, part teacher and eternal student blend, and I go on expeditions to study remote ecosystems and then create media and classes to share the findings.

I just returned from diving in the Arctic with a team of polar explorers, to document disappearing sea ice and conduct cultural exchanges in remote Inuit communities. It was my first time diving in ice, and although challenging it was exhilarating. Our team had several cultural exchange components to our sharing in the local communities, including creating an underwater robot lab, where kids got to build, test and pilot their own mini remote ROVs (Remotely Operated Vehicles). We shared a bit about climate science, as well as I shared my love for ocean acoustics with the children.

The younger kids also really enjoyed seeing my underwater cameras and learning about the specialized gear that would allow us to breathe and film underwater. Two of the youngest members of our team are Inuit women in their early 20’s, and I was honored to take them diving for their first time in their icy homeland, to see “The Ocean at Eye Level. In this program, we also bring locals drysuit snorkeling, which for many is a first time ever immersed in the ocean and ice that surrounds them. Watching them experience this immersive experience is thrilling.

This sharing and science outreach is rewarding beyond description, and I am happy to have found a way to begin to give back.

Our team, called Sedna, is comprised primarily of pioneering women who are artists, teachers and scientists that all seek to find unique ways to interact with new people and places, to share and get a perspective on life in the Arctic that few others see, and find a way to make it meaningful for all parties. Rather than to take, we are there to share and support in mutual learning. The students in different towns taught me words for different kinds of ice, which algae (seaweed) are best raw or in soups, and I even learned a few new dance moves!

Has it been a smooth road?
When I started this line of work over 20 years ago, struggles included at times feeling like I had hit a wall, as there were not many young women doing what I started and wanted to do: underwater photo/videography, marine biology research and production. Sylvia Earle was a deep-sea pioneer and inspiration, and I got to dive with her at a rare site in Hawaii when I was starting out. She encouraged me and shared her path, which made my dreams to become an undersea explorer seem possible.

I worked hard to prove myself in this salty man’s world and found many other unlikely helpers along the way. At first it seemed like my world in tv production and journalism were at odds with my love for marine ecology, but finally, I found a niche in teaching and what is called “ocean science communication. With this, I have been able to seek out and create many unique outreach opportunities, especially in remote communities where traditionally there are few women doing my type of work.

Funding is always a challenge, but the work is important enough that we manage to find a way with help from friends and a few corporate sponsors. One of the other struggles I face is how to get the message through to people, so that we may shift our behavior and understand how important the ocean is to our survival.

Early on I thought communication was key, then I went back for my master’s degree as I felt the fresh science would change things if I could reach the minds of citizens. Now I see that at times we need to find ways to reach past their brains and just touch their hearts. I believe that by creating an emotional response, the whole person can be reached most effectively. To this end, I have started to pair myself with all kinds of artists, and share my rare footage with those who strive to make a difference creatively.

Recently, I cut together 20 minutes of footage — from beautiful shots of young humpback whales frolicking, manta rays and pristine coral reefs, and contrasted it with footage of fish skeletons in ghost nets in the Great Pacific Garbage Patch, to a dead fin whale from a ship-strike incident rolling around in the surf off Point Loma. We projected this footage on hanging fabrics in an outside venue, as an improvisational violinist played to the crowd.

The effect was better than anticipated. Even without the data or facts, people were moved. I seek to find and form more partnerships like this to continue to seek new ways to reach people and show them what we’re doing to the creatures of Planet Ocean.

Recently, I was designated a Fellow by The Explorers Club and attended the annual dinner in New York. (Founded in 1904, The Explorers Club did not admit women until 1981. She was one of the first women to join). There I got to see Sylvia Earle again, 20 years later, and share with her the change she made in my life. The reason I am involved in educational outreach — especially with young women in underserved communities, is to help inspire the next generation of scientific explorers as Dr. Sylvia Earle had done for me.

We’d love to hear more about your business.
My best friend, once my supervisor and Executive Director at the NBC, Robert Fitzgerald decided to leave the corporate world for work more personally rewarding. He became my business partner to help me bring my vision to life, and took my project Spiral Pacific from a grad student’s vision, into a non-profit organization specializing in documentary production and educational outreach.

We are unique in that as a collaborative of scientists and educators, we take a different approach and support many of our partner organizations by donating data and footage to help with the projects of others. This spirit of generosity comes full circle, as for the last expedition to the Arctic I was partially supported by scuba equipment manufacturer Aqualung/Apex with an ice-rated regulator setup, and the drysuit company Santi provided our entire team of 17 with entire dry suits and snow gear at minimal cost.

Even local dry suit company Divers Unlimited International did their part by helping me get together last minute polar dive gear I was missing before departure. In October I will be flying to Maui and working with another partner called Pacific Biodiesel, who has agreed to support our project with a donation to help offset the enormous cost of travel and shipping to the Arctic. We are really supported by small donations from friends and family, as well as a handful of corporate sponsors.

This allows us to get into the field, share what we know and do with local communities, and bring those amazing experiences back to share with students here in San Diego. My affiliation with UCSD and Scripps Institution of Oceanography continues to grow, and I am currently starting a project with the Marine Physical Lab to record and document soundscapes and bioacoustics. The sea is alive with sound, and I am branching out beyond whales to record some interesting ocean sounds, including the thunderous rumblings of icebergs calving.

Is our city a good place to do what you do?
On an environmental front, San Diego is far ahead of many other cities as some coastal regions are in complete denial of the science and larger processes at work in this climate shift we have created by overuse of fossil fuels.

From a planning perspective to green space goals, San Diego is a leader. I believe we need to move ahead keeping the science in mind and taking proactive steps to meet issues like sea level rise, increased extreme weather events, ocean acidification and marine pollution head-on. Making policy changes to reflect this is one way we can rise to meet the shifting sands.